The second project meeting took place on 10 June 2020 online where the partners discussed the advances on the development and validation of project outputs. The partners discussed the implementation and design of the games/activities in the web platform, as well as the process of adapting, devising and extending contents in the games and interactive applications. They discussed and agreed on the Communication, dissemination and visibility strategies developed for the project. 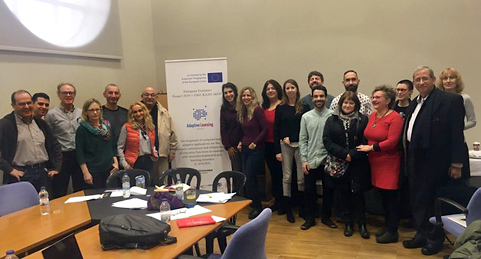 On December 12 and 13, 2019, the enthusiastic team of the project gathered together in Zaragoza, Spain to discuss and agree on the detailed plan for project implementation and the schedule for fulfilling the ambitious project targets. During those two days the tasks were divided between the partners and it was made clear who was responsible for what. The work on designing the path for development of project’s Intellectual Outputs were organized as specific sessions by working groups, namely: “Development of tasks to measure executive functions” and “Educational web platform and Software”. Based on the conclusions of the brain storm sessions the grounds for the development of the methodological framework of the products were laid.